The Science of Being Unphotogenic (part 1) - Smart Photography

The Science of Being Unphotogenic (part 1)

This is for people who refer to themselves as being 'unphotogenic' - I'm going to write a couple of posts on this, as it became a really long topic once I'd started.

I've said before I don't believe there's any such thing as being unphotogenic - everybody can have images of themselves they'll love, and a lot of how you look in a photo is down to who's holding the camera.

However, not liking yourself in photos is very real, and not being comfortable in front of a camera will translate to a photo easily, and create a less than perfect portrait of you.  It's not necessarily a real portrait though, and I'll talk more about that in the next post.

So, the only version of 'you' that you're familiar with is your mirror image.

The fewer photos of yourself you see, the more your mirror image becomes your only picture of you.

And the more that's the case, the less likely you are to like photos of yourself - and it's nothing to do with being unphotogenic at all.

The problem is - we're not symmetrical. Your mirror image looks different to how everyone else sees you, whilst it's the image of you that's the most imprinted on your brain. So, you see a photo and everyone else looks fine, but you look somehow 'wrong'. Never mind that you may not have been comfortable being photographed - you're seeing a version of you that just doesn't look familiar. It's not necessarily better or worse, it's just doesn't tie up with the 'you' in your mind. That in itself can make you uncomfortable with a photo of yourself.

This can be amplified if you, for example, have an asymmetrical haircut, or a particular feature (anything from a tattoo to a mole) that's going to appear on the 'wrong' side to where you're used to seeing it in the mirror. However, for most people who hate having their photo taken, even if everyone else is telling them they look amazing in a photo, they're often more distracted by the fact the image isn't the familiar version of them. 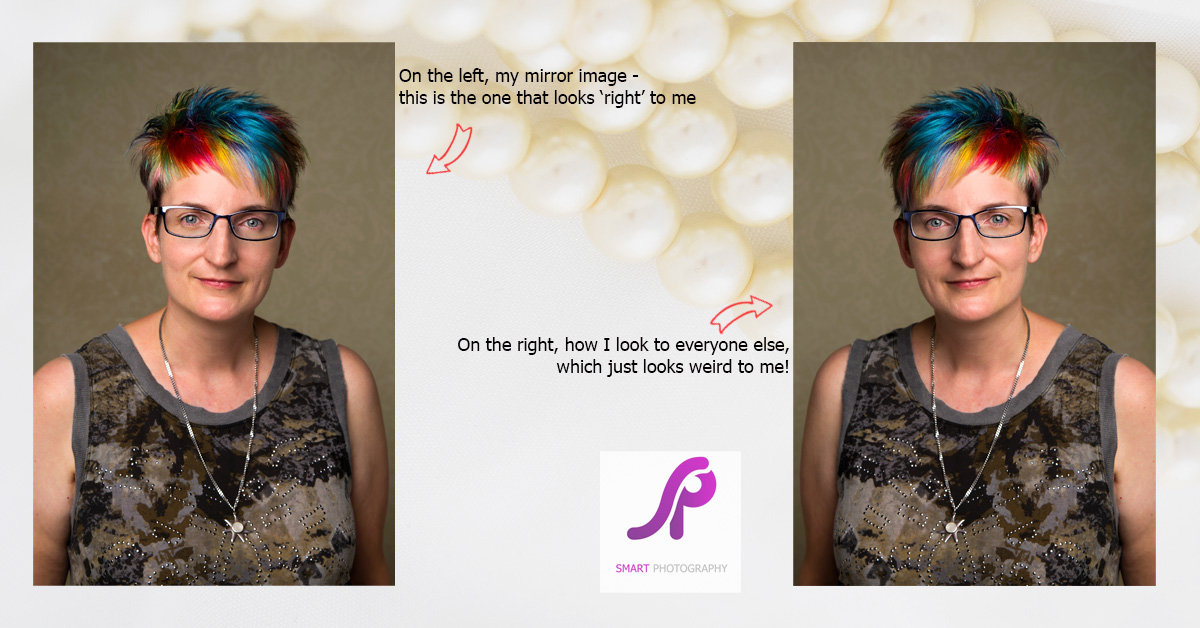 This is called the 'mere-exposure effect' and if you really want to get into the science of it, click here to read about it.

This talks about how people prefer photos of them that are 'flipped' to show a mirror image, whereas their friends/partners will prefer the photo in its original version - each person prefers the image that is most familiar to themselves.

The answer of course is simple, and also anathema to the camera shy - it's to start getting used to the you in photos, so that you become more familiar to yourself, and thus eliminate that feeling of thinking you look weirdly different in photos.

(By the way - when you're taking a selfie, and I know that's probably rare in the first place, often your phone will show you a mirror image on the screen, but the photo when saved will be flipped back - so if you've ever been confused as to why you thought you looked better on the screen than in the photo, this could be why!).

Maybe try taking some photos of yourself (or get someone else to) and flipping them to a reverse image - see which you prefer and let me know.

PS - want to read more about how we make ourselves appear unphotogenic? Click here!

A cracking post Anna, thank you for sharing these insights on why we think we look funny! And I always rotate my images…. At least I know why now

Ok this makes a lot of sense! Thank you for explaining about the flipping pics on selfies.

Great post, never thought of this before, i’m one of those that is unphotogenic or perhaps i’m not but my mirror image is 🙂

First off, Anna ~ I think you are incredibly photogenic! As a science gal, I am fascinated by the science and mathematics of what people find “beautiful.” Have you ever research the “golden proportion?” I think it would be a great addition to this post series. Blessings~ Kim.

Thank you Kim! I haven’t heard of the ‘golden proportion’, I’ll have a look into it xx

Gee. Never thought of this. BTW – I love your hair colour(s)!

I get what your saying But I just can’t look in a mirror . Any photos of me are when I’m drunk.

Oh no, Michelle, I would like to say that everyone loves their face, but I know it’s not true – https://smartphotography.co.uk/face-your-face/

I just flipped a photo of me that I disliked and I like it so much better! Thank you for your insight