I've also considered myself fairly lucky, with my breasts. Admittedly, they haven't had to do much, not having had children, but they've always been ok. Maybe a little on the large size, but surely G is the new D anyway?
I can't pretend I've looked after them well - a perfunctory check over when someone posts something more relevant on Facebook than what colour their bra is, to remind me to check for lumps. So, they're not too neglected and I expect them to pretty much stay the same and do their thing (fill clothes mainly).
It's a long time since I've been bra shopping and, having lost a little weight, I decided when you
1. have no bras that fit properly
and
2. tell your clients, pretty much every day of the week "the most important thing you can bring with you is a well fitting bra"
then it's probably time for a shopping trip.

Since I didn't know what size I was shopping for, first stop - Bravissimo, to be measured.
Now, back in the day this involved a tape measure, I'm sure it did. Not so now. This time round I was asked what size bra I was wearing (erm...it's been a while and the label's kind of too faded to see...) and then just sort of looked at. It didn't seem all that scientific, and I was feeling skeptical (and quite cold, those robes they provide being very thin).
I needn't have worried - clearly they're good at what they do, and off went the assistant to find me a selection to try on. I was looking for (I thought) one black, one nude, one moulded cup, and one 'pretty one'.
The nude bra buying process went fairly smoothly. I discovered I have gone from a G cup to an E cup, and the Melrose bra was found to be perfect. So perfect, I thought that could do for the black one too. Same size - totally different fit (something to do with the dyeing process I am told). Never mind, let's move on to moulded cups.

I had this notion that a moulded cup would be comfy, and thus perfect for dog walking. Now, they quite possibly would be comfy - however, being moulded, they of course have a shape to them, and that shape is in no way the shape of my breast. You know those breast enhancers aka 'chicken fillets' for boosting your bra size? I reckon I would have needed those on top of my chest, not underneath. Lovely and moulded and rounded the cups to the bras may have been - sadly, I am apparently not. I was horrified. I tried another one - same result. "But why?" I asked the lovely assistant. "Well," she explained, "as women get older the fat in your breasts can get drawn downwards, leaving you with a less full cup".
Older! I'm 41! Surely older is something like 40 years away? "Try this one" she said - a moulded bra, but a plunge one (Deco Delight by Freya).  Now this fitted perfectly! The cleavage it gave was amazing. It also felt like the most unsupportive bra, ever - not quite fulfilling the brief of 'perfect for dogwalking'. I was tempted, but I don't want to give anyone a heart attack at 8am in the middle of the field so I sighed, declined and moved onto finding a black bra.

This was more successful. I think I went for 'Clara' in the end, but the Andorra bra, by Panache too, was also lovely.

And so it came to the pretty one. I actually wasn't feeling particularly pretty by this point, I was just feeling saggy. I'd thought I might get something in the sale, but in the manner of sales, there was nothing in my size (apart from in a moulded cup, ha!).  I tried a few, and the best fit came from Bravissimo's own Rosie bra, so I went for that one (and a couple of pairs of the matching knickers, since they weren't thongs).

So, on the one hand, I got what I wanted, and it's fair to say that I definitely needed the new size - I do feel much more supported and comfortable. On the other hand, I wasn't quite prepared to feel like my breasts are actually the wrong shape for bras. Asking around online (which took a bit of thinking about, as I was wondering "is this just me? If I ask people about it will they all say "what? no? that doesn't happen") I found company. The words 'spaniel's ears' may have been mentioned more than once - strangely comforting, as I am not at that stage. Strangely depressing if that's where they're heading (which is essentially South). Also - many recommendations for balconette bras, so if anyone is reading all this and nodding (instead of just looking horrified) then maybe that's a tip for you - I am going to check balconette's out next time I'm shopping (online probably, now I have a size to go for).
All that said, I think the bras fit well, and I definitely feel like I look more supported.
'Rosie' Bra with... 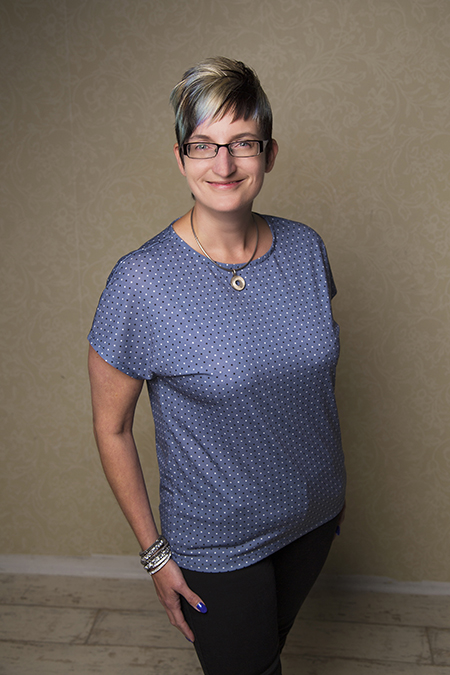 Incidentally, a bit of googling has told me that breast sag has a name – Ptosis, and a cause – gravity. Nothing to do with breast feeding, or not, or wearing a bra enough, or not – just the luck of the draw and gravity! Hmph. I would like to think that at some point manufacturers might catch up and start to make bras to fit a range of shapes. In the meantime I will remember that many women are having a much worse time of it, breast-wise, and be grateful for what I have.

You look lovely Anna. I hate bra shopping, but always insist on a good fit. I do have to be feeling particularly self confident to do it though as being told I am the wrong shape for the bra is common and demoralising. Please, manufacturers, take note. The bras should be the right shape for us, not us for the bra.
#hobbyhorse

Thank you so much! Totally agree, too – feeling the wrong shape is in no way a good thing! xx

Love Panache! They make the most comfortable supportive bras ever. I have just got a “space” bra in teal and that’s fabulous – I can sleep in it! No idea who makes it, but it’s marvellous. Now you’ve got one awesome bra, you won’t go back to your old ones x

I’ve got 3 lovely ones now! I sleep in a top with ‘secret’ support but having read that doesn’t help, I may go back to any old t-shirt… xx

Bra shopping is a minefield, and a nightmare. If a bra fits, then the shoulder straps slip, or the material shows through tops, or some other problem. ‘Rosie’ is very pretty, and you’re looking fabulous. I love the hair!

I have given up caring if the material shows through tops! Comfort first xx

Hi Anna – the bra looks fab on you! And yes, the last few times I’ve gone bra shopping I’ve just been looked at and then they bring a selection.
You can be different sizes in various styles – I’m usually a DD cup in full cup bra but often have to go to E in a plunge to avoid ‘overspill’ lol.
Men have no idea – they just swan through M&S, grab multi pack of white vests, pay and swan out again.

I couldn’t think of an occasion where the plunge bra would be appropriate, but I really, really want to! 😉